2018 is also a remarkable year for few top bollywood movies. So we have put together a list of top 05 bollywood Hindi movies of 2018. 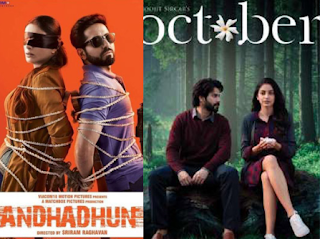 1. Andhadhun: Ayushmann Khurrana and Tabu are top notch, not one scene where either of them are slacking off. The piano playing, the rabbit, Anil Dhawan, the sleeping crab, the blindness, the actors, the props. Five writers, Sriram Raghavan, Arijit Biswas, Pooja Ladha Surti, Yogesh Chandekar, Hemanth Rao, and yet they don’t spoil this innovative sleuth broth. Director Shriram Raghavan is perfection personified. Ignore at your own risk.

2. October: Writer Juhi Chaturvedi’s tale about a man’s journey of unconditional love was the most remarkable movie of 2018. Director Shoojit Sircar tiptoes his way around her beautiful writing with an ultra-sensitive touch. Varun Dhawan is a revelation. In the crazy hustle bustle of life, this one way track of quiet love is sure to survive the test of selfish times. It’s an experience worth living.

3. Raazi: What an inspiration that story is based on a real events from the life of a female spy. Alia Bhatt’s turned in a fantastic performance. In her sixth film, Meghana gets the balance right between commercial and critical, making it a clear winner. Watch it.

4. Badhaai Ho: What sheer brilliance of finding comedy in the mundane. Amit Sharma executes pure entertainment on screen with the material that writers Shanatanu Srivastava, Akshat Ghildial and Jyoti Kapoor deliver on paper. Neena Gupta excels as a mother who finds herself pregnant in a mature age and decides to keep the baby, blaming husband Gajraj Rao for the predicament. People react to the news in hilarious ways. Son Ayushmann Khurrana is highly embarrassed. A fresh perspective on the vagaries of life. Do not miss.

5. Sanju: If it wasn’t for Ranbir Kapoor’s jaw dropping performance, Rajkumar Hirani’s white-washed portrayal of Sanjay Dutt might not have made it. It looked like Hirani wasn’t able to get over his love for Sanjay and make an honest movie. Ranbir is flawless as Sanju though… missing out on the magnificence of his genius would be a crime.

The makers of the upcoming film Sadak 2 directed by Mahesh Bhatt had only a song shoot left when the pandemic hit the...
Read more
BOLLYWOOD

Singer Sonu Nigam recently posted a video talking about the atrocities in the Indian music industry. This was in relation to the uproar in...
Read more

How Netflix works? What happens when you watch stuff on Netflix?

While watching a Netflix movie have you ever wondered how your favorite video streaming app operates? How does it earn money? How...
Read more

The chairman of Central Board Of Film Certification, Prasoon Joshi recently expressed his displeasure and disagreement with a few scenes in Amazon Prime‘s new...
Read more

Dark is a German series that has kept the audience on its toes since its conception. The show was a surprise...
Read more
Load more

How Netflix works? What happens when you watch stuff on Netflix?

While watching a Netflix movie have you ever wondered how your favorite video streaming app operates? How does it earn money? How...
Read more

The chairman of Central Board Of Film Certification, Prasoon Joshi recently expressed his displeasure and disagreement with a few scenes in Amazon Prime‘s new...
Read more