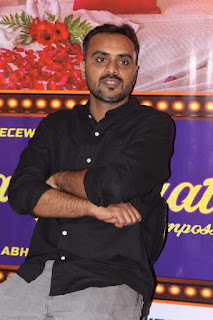 Filmmaker Abhinav Thakur, who is gearing up for the release of ‘Yeh Suhaagraat Impossible’, has said that audience thought process will change about marriage after watching his forthcoming film.

Abhinav Thakur was interacting with the media to promote ‘Yeh Suhaagraat Impossible’ on Friday in Mumbai.

Talking about ‘Yeh Suhaagraat Impossible’, Thakur said, “Actually, story of this film is based on Uttar Pradesh and Bihar region. Nowadays, couple get married in a hurry and their parents also support their decision but some of them, lead happy married life and some of them not.

So, through this film, I am just trying to tell that people shouldn’t be in a hurry while getting married. Most of the times, people get married but at the time of their first night of marriage, they get to know some unknown facts about each other which leads to incompatibility and conflict between the couple so, my film is basically an entertaining satirical comedy film.”

Sharing his perspective about marriage, Thakur said, “I feel before getting into a marriage, there should be mutual understanding between the couple and they should spend adequate time with each other to know their personality. Couple also should consult with their parents before getting married and apart from that, people get married due to societal pressure that shouldn’t be the case anymore.

I think audience thought process will definitely change after watching this movie. There is a saying that ‘it’s better to wait long than marry wrong’ and that’s what we have shown in the film. I hope after watching this film, people will think twice before getting into a marriage.”

It is directed by Abhinav Thakur and produced by Narendra Patel & Jayesh Patel.

‘Yeh Suhaagraat Impossible’ is releasing in cinemas on 8th March 2019.

Actor Anushka Sharma and her husband Virat Kohli are capitalizing on their self isolation period. Some of the time, doing entertaining things...
Read more
ENTERTAINMENT

Entertainer and on-screen character Sunil Grover has shared a fun video where he has offered the ideal errand that fans can take...
Read more
ENTERTAINMENT