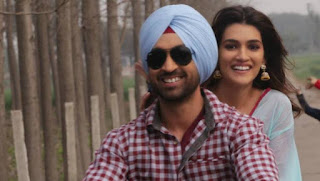 A movie in movie, showcasing Police van of a fictional town of Ferozepur in Punjab with the man in charge is Arjun Patiala (Diljit Dosanjh) – a striking young man, who has his priorities clear which includes read women, whiskey and work. Giving him company is his reliable but goofier constable Onidda Singh (Varun Sharma), who has given up on women after numerous heartbreaks. He has now settled for a buffalo as his love. If you thought that’s peculiar, then you are wrong there is a lot on the way. There is a stunning yet energetic television journalist Ritu Randhawa (Kriti Sanon), who casually reports on the awful trigger-happy goons who riddle Ferozepur. A deceitful MLA Prapti Makkad (Seema Pahwa), who is often referred to as ‘Property Makkar’ for her despicable deals in real estate. And there is also susceptible goon called Sakool (Mohammed Zeeshan Ayyub) and a host of other unusual characters including IPS Gill (Ronit Roy), who is frankly the only, sorted one. All of them are part of a fictional story of a formula film narrated by a writer, who often breaks the fourth wall and talks to the audience. This altogether takes away the scope of taking the film seriously.

The film’s first half breezes through with a few fun moments including a cameo by Sunny Leone. Diljit Dosanjh delivers an upright performance with a few laugh-out-loud moments. His innocence brings out the exposure of his character that is instantly likeable. Kriti Sanon looks unblemished, but the same cannot be said about her character. The writing gives her little to work with other than mouthing dialogues without much assurance. But the one who manages to steal the show by delivering the most laughs is Varun Sharma. From his amusing back-story to his enforced singlehood, Varun is simply the guy, who can make you laugh at his outlay.

The movie’s writing, direction and execution become very immature and pointless in the second half, as it stumbles towards an abrupt of a climax. Thankfully, the makers do not used any kind of cheap, or offensive absurdity in a desperate attempt to make you laugh. Film’s music is average except for the perky dance number ‘Preeto’.

Parody comedies can be a complicated affair and this one is way too underwhelming to delight your funny bone.

Prime Minister, Narendra Modi is celebrating his 70th birthday today. The PM was flooded with birthday wishes all around the globe. PM...
Read more
BOLLYWOOD

Titled ‘Haseena Pagal Deewani’, the track is a catchy wedding song that will have you grooving to it. Kiara looks...
Read more